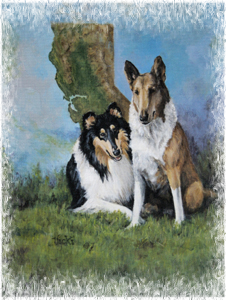 NorCal Collie Rescue brings you the latest research on drug sensitivity in Collies.

This research is being conducted at Washington State University, by Dr. Katrina Mealey and at the University of California Davis Veterinary Genetics Laboratory by Dr. Mark Neff and his team of researchers.


General summary:
* Click here for your own Collie Drug sensitivity form to take to your veterinarian.

ABSTRACT:  A mutation in the canine multidrug resistance gene, MDR1, has previously been associated with drug sensitivities in two breeds from the collie lineage. We exploited breed phylogeny and reports of drug sensitivity to survey other purebred populations that might be genetically at risk. We found that the same allele, mdr1-1

, segregated in seven additional breeds, including two sighthounds that were not expected to share collie ancestry. A mutant haplotype that was conserved among affected breeds indicated that the allele was identical by descent. Based on breed histories and the extent of linkage disequilibrium, we conclude that all dogs carrying mdr1-1

are descendants of a dog that lived in Great Britain before the genetic isolation of breeds by registry (ca. 1873). The breed distribution and frequency of mdr1-1

have applications in veterinary medicine and selective breeding, whereas the allele's history recounts the emergence of formally recognized breeds from an admixed population of working sheepdogs.  Click here to obtain the article from PNAS.


Am J Vet Res. 2002 Apr;63(4):479-81.
Frequency of the mutant MDR1 allele associated with ivermectin sensitivity in a sample population of collies from the northwestern United States.

OBJECTIVE: To determine the frequency of the MDR1 gene mutation (polymorphism) associated with ivermectin sensitivity in a sample population of Collies in Washington and Idaho. ANIMALS: 40 healthy client-owned Collies. PROCEDURE: A blood sample (8 ml) was collected from each dog and used for RNA extraction. Reverse transcriptase was used to generate MDR1 cDNA. Polymerase chain reaction (PCR) primers were designed to amplify a 1,061-base pair region of the MDR1 gene. The PCR products were sequenced to determine whether the Collies had 0, 1, or 2 mutant alleles. Pedigrees of some dogs were available for analysis to determine relatedness of affected dogs. RESULTS: Of the 40 Collies, 9 (22%) were homozygous for the normal allele (normal), 17 (42%) were heterozygous (carrier), and 14 (35%) were homozygous for the mutant allele (affected). Pedigree analysis revealed that some, but not all, affected dogs were related to each other within the 4 most recent generations. CONCLUSIONS AND CLINICAL RELEVANCE: A high percentage of a sample population of Collies in Washington and Idaho are affected or carriers of the mutant MDR1 allele associated with ivermectin sensitivity. A similar frequency of this mutation may be detected in dogs from other geographic areas. Pharmacologic treatment with ivermectin, loperamide, vincristine, and other drugs that are substrates of P-glycoprotein, the MDR1 gene product, may result in neurologic toxicosis in a high percentage of Collies. J Am Vet Med Assoc. 1999 Dec 15;215(12):1813-7, 1806.
Respiratory failure attributable to moxidectin intoxication in a dog.
Beal MW, Poppenga RH, Birdsall WJ, Hughes D.  Department of Clinical Studies, School of Veterinary Medicine, University of Pennsylvania, Philadelphia 19104-6010, USA.

A 5-month-old 22-kg (48.4-lb) sexually intact male Collie was examined after ingesting a moxidectin-containing deworming medication. The dog was comatose and had respiratory arrest after progressively worsening lethargy, ataxia, and seizures. Exposure was confirmed by isolation of moxidectin from a biopsy specimen of adipose tissue, using liquid chromatography-mass spectroscopy methods. Treatment included use of intermittent positive-pressure ventilation, activated charcoal and cathartic administered enterally, nutrients administered via nasogastric tube, and intensive supportive care. The dog was weaned from a ventilator on day 6 after ingestion and was discharged on day 10. The dog was considered clinically normal during examination 24 days after ingestion. On the basis of the dog reported here and toxicologic data provided by the manufacturer of the deworming product, some Collies may have increased susceptibility to products containing high doses of moxidectin. American Journal of Veterinary Research 52:1170-1177. Assessment of Toxicosis Induced by High-Dose Administration of Milbemycin Oxime in Collies. Tranquilli, W. J., A. J. Paul, and K. S. Todd. 1991.

Fifteen Collies, previously having mild reactions to ivermectin challenge (120-mu-g/kg of body weight; 20 times the recommended dosage level), were studied to evaluate the effects of milbemycin oxime administration at 5 and 10 mg/kg (10 and 20 times the manufacturer's recommended dosage). Five replicates, comprising 3 dogs each, were formed on the basis of body weight. Within replicates, each dog was randomly allocated to treatment with 5 or 10 mg of milbemycin/kg or served as a untreated control. Dogs were examined repeatedly for signs of toxicosis for 4 days after treatment and daily thereafter. Two of 5 dogs treated at 5 mg/kg (10x) developed signs of mild depression on the day of treatment, but were normal 24 hours after treatment. All 5 dogs treated at 10 mg/kg (20x) developed signs of mild depression and ataxia by 6 hours. Signs persisted for 24 hours in 3 dogs. Two of these dogs also had mydriasis, whereas 3 salivated excessively. All dogs recovered completely by day 2 after treatment. The results of this study demonstrated that Collies sensitive to the effects of 120-mu-g of ivermectin (20x)/kg show similar sensitivity to the effects of milbemycin oxine administered at 10 mg/kg (20x). We conclude that ivermectin and milbemycin commercial formulations have similar margins of safety and that milbemycin toxicosis appears to be dose-dependent in Collies with a demonstrated sensitivity to ivermectin.  Dog and Kennel Magazine.  Ivermectin and the macrocyclic lactones.  Salvation or curse?  Leslie Crane Rugg.  Click here to view article, reprinted with permission.